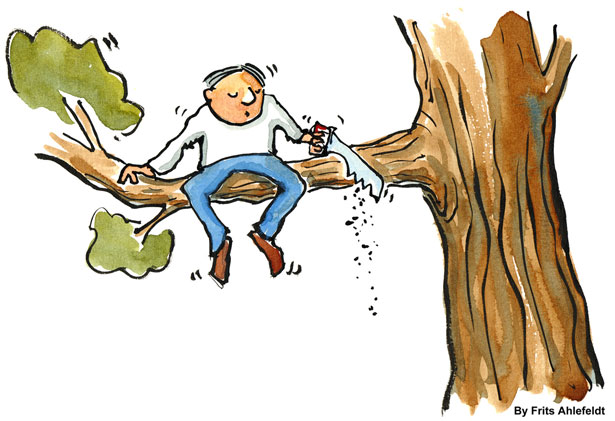 Following the excellent guest blog that my friend Jack wrote (View Here) one of the things that jumps out at me is the phrase I heard from a very smart man a few years ago in the title. That is, simply, that the things that we do that should make perfect sense seem to be trumped by the things we actually do. We lack the common sense! This short post will highlight a few of those and I’m sure you can think of your own ones too!

At many grassroots matches the warm up for the team consists of a long line of players, taking their place in the queue to adorn the standard forlorn look, as they wait patiently for their chance to pass to the coach. The ball gets delivered to the coach and he lays it back, as you confidently stride on to smash it at the goalkeeper. If you hit the target it just becomes another moment of the goalkeeper doing their best to protect their face. If it misses, this is your real warm up – running forty yards to go and collect your mis-placed shot! This needs to be done at pace because the queue of people are waiting for the ball.

The irony often is that at that moment there is a full bag of balls on the side of the pitch just waiting to be used in some kind of way. The irony is also the coach is getting more touches than the players!

Common sense: Get the players to spend more time with the ball at their feet, practice the kind of things they are going to do in the game that starts in twenty minutes time and get them playing mini-matches. Loads of touches, loads of decisions and loads better than standing in a line.

Adult ego is a funny thing. We often feel under pressure on the side of the pitch to conform to some kind of coaching norm that is witnessed on Match of the Day or Super Sunday; that of needing to be seen to be shouting stuff and always playing our best team. Now, unless your mortgage is on the line, grassroots football is not really like that in my opinion. We don’t have that kind of pressure.

The children that come to play sport, whether football or otherwise, typically play for several reasons. They are normally because they love the sport and find it fun, they want to be with their mates and they enjoy the element of competition this often brings. What they don’t like is being stood around and talked at, an adult over-emphasis on winning and not getting to play.

So why should one kid play 100% of every match and one kid only get on if the team are 3-0 with five minutes to play?

Correct me if this isn’t the case in your sport but pretty much in every grassroots football team all the players pay the same amount of subs each week to be there. So why should one kid play 100% of every match and one kid only get on if the team are 3-0 with five minutes to play?

If you take a group of kids tenpin bowling, whether they are good or not, whether they score 40 or 140, they all pay the same and get the same amount of balls to throw down the lane.

Common sense: Get the kids on the pitch. Generally, until they are about 12/13 years old, kids want fairness and equality. They understand that if they don’t get to play, they leave and find something else to do. If their mates leave that then raises the question whether they should play too.

Unless they are about to get hit by a car I’m not sure why there is a need to shout at kids, especially during the course of a football match. I know parents and coaches that have excellent jobs, they are responsible for big companies and manage lots of staff and they would never dream of behaving like this at work. However, you put them on the side of a football pitch and they turn into a lunatic. It doesn’t make any sense but somehow has become a cultural norm and accepted too commonly.

I asked some of the parents at my old grassroots club about why they did this and the general feedback was “I see other parents doing it and I thought it helped”. Well, I went to speak to the kids about this and, pretty much to a player, they all said it doesn’t help much! I asked kids who they listened to during a game, the coach or their parents, and they all said “to the coach”. One kid actually said “I don’t listen to either as I think I can make better decisions on my own” – that’s the kinda player we need!

Common sense: Work with the parents on key things that will help during the game and also after the game. Ask them to cheer and applaud good play from both teams, not just their own, as this is something that shows the kids they are doing a good job. On the way home, ask the parents to lay off the kids until they want to talk about it, try not to start giving them the adults view immediately of what they should have done!

Grassroots teams have a familiar look to them; biggest kid plays centre half, because they can kick it the furthest. The fastest kid plays up front or out wide, in the hope that their fastest kid is faster than the opposition biggest kid. The weakest player is either in goal or at full back, where the coach tries to hide them. The centre midfield is made up of the player that is the school cross-country champion and the best player. The coach’s son will probably be a forward too!

The problem is we have no idea where these players are going to end up playing in the future. We have no clue what is going to happen on the other side of the maturation lottery. Players need to be given an all-round game appreciation and understanding. This can be done strategically throughout the season so they experience playing across a variety of roles, so they get the chance to learn about different ones. Certainly try and avoid changing their position five times in one game, that would just confuse anyone!

I have written a post about this in the past (View Here) and there is a bit more detail. Also, by developing an appreciation of the roles around you, that helps you understand where the players there may want the ball to help them utilise space or time ahead of them. It’s linked to ‘shared affordances’ for the more academic readers.

Common sense: Rotate players at different times and in a planned strategic way. This should include the goalkeeper at mini-soccer age groups too. Yes, you may lose a few games but who cares? This is about developing players for the long term, not about today. And work the parents to help them understand the benefits and why you are doing it.

The beauty of common sense is that it often becomes the thing that people lack and we start to do things without thinking. There are some easy wins that can make youth sport a more pleasurable experience for all, especially the kids.