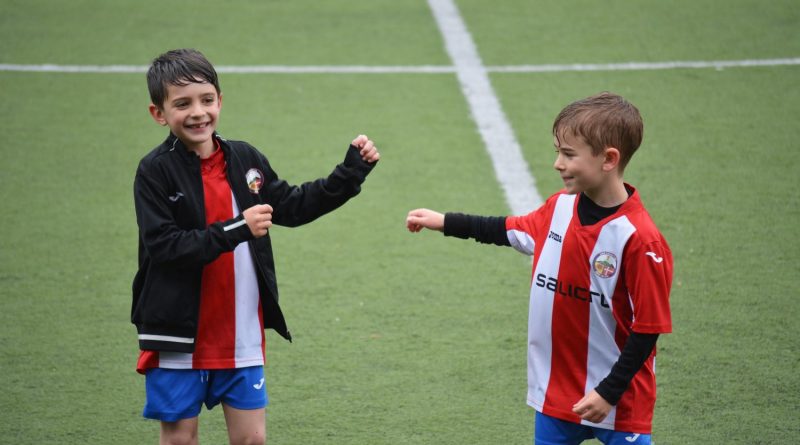 I had the pleasure yesterday of listening to a webinar organised by The FA with six of their staff and listen to some views on the Academy Games Programme and the role of this within player development. The debate was pretty wide-ranging and encompassed a bit on international football on the boys and girls side as well but it wasn’t about grassroots. The panel managed to stay away from those issues when talking about formats and kept it pretty focused.

The one slide that prompted me to be curious and consider a few questions was this one following:

There was lots of work done to shift and evolve the grassroots game to move from starting 11v11 at U11 to beginning it at U13. There was also lots of desire from local leagues and clubs to take this to U14 in fact and make 9v9 the mandatory format at U13 as well. The decision in the end was to change the wording to say U14 *could* be 11v11 as the maximum format which gave leagues the options of playing 9v9 if they wished.

However, the professional game decided to remain with 11v11 starting at U12 and much of the discussion on the webinar was about this. The panel were talking about how 11v11 at U12 was basically “a cross-country competition” that played entirely into the hands of the early matured or advantaged from a relative age perspective. The point being made was about how this was less beneficial for player development.

Having been part of this system in the professional game for six years I can recall one exceptional player and now current pro in a top league raising this point too. We had just travelled over 3 hours on a coach to play a game with the U10’s, U12’s and U14’s (which probably raises a different question itself). The U14 lad said to me “Why have we just spent over 7 hours on a coach, for some of us to play 20 minutes of football and they put us on the U18 pitch? I’m only 13. What’s the point of that?” He raised a very fair point and one I couldn’t justify.

So much of the debate was centred on the structure. Paul Holder, a big influence on my own coaching and a genius when working with players, was strongly against 11v11 at U12. He also likened it to going into a shoe shop and asking for “a pair of shoes for a 12yr old” which was an interesting analogy. There is definitely some sense to this as in other areas of life we fit the outcome to the needs of the individual.

Whilst I quite like his analogy it is never as simple as a reductionist view to that principle. Football is a team game and played by lots of kids of different shapes and sizes. How you match one format to the needs of all kids is pretty hard plus all the complexities of development psychologically, cognitively, emotionally, socially, technically etc. However, the solution raised was variety.

The slide presented above raises some interesting points I think in how this particular time in a kids life is a big one. That change and settling in period when most go from primary to secondary school can be a tricky time. New friendship groups, people from different schools merging, hierarchy of finding your place in a new structure all add up to a very challenging time for many kids.

There is lots of research in education about the impact of this transition and how there are links to declines in motivation, school engagement, declines in attainment, increase in absence and a negative impact on wellbeing. All at a time we then decide to change the format of football and the structure of the game. If we are being holistic and humanistic in our development pathways of kids then I feel this should all be taken into account moreso.

The other element from the slide I am curious about is the research stats provided in the bottom right hand corner. This is suggesting that the difference from 9v9 to 11v11 is way more passes, shots, goals, dribbles and 1v1’s. Which on face value is great evidence to support why 9v9 may be advantageous for player development.

In 2003 a research study was done by Rick Fernoglio through Manchester Met University on the comparisons between 4v4 and 8v8. Manchester United, spearheaded by Tony Whelan’s superb drive to make the world more child-centred, did a detailed research project to look at the differences. The findings from the university project found that 4v4 created the following differences from 8v8:

So has something literally INCREDIBLE happened here? Did a research project comparing 9v9 to 11v11 create IDENTICAL findings to a Manchester Met academic study? If they found the outcomes for different kids playing games 17 years later to be word-for-word the same as Fernoglio’s study in 2003 on 4v4?? Well, WOW! The chances of that happening must be billions-to-one!! Or is that stat on the slide incorrect and not telling the story it appears to be trying to tell? I don’t know the answer but I’m curious about it.

We did some small-scale pilots with three top Premier League clubs playing 9v9 back in 2010/11 to start to understand this but if they have now done a detailed study, that created the findings presented, I would love to read this. I haven’t heard of one being done but I’m out the loop of that now but is still an area of real interest to me. Anyone point me in the direction of this 9v9 study?

Let me also be clear on one point with the PL Games Programme; what Dean Smith has done there over the last few years to change and evolve this is super work. Really good stuff and he should be really proud of the impact he has had there. The data shared about the amount and variety of events the kids now have access to as part of their diet of football is awesome. There are definitely lessons that can be learnt for grassroots game from what they achieved (whilst I appreciate the different resources and contexts involved).

However, the points made on the webinar warrant further discussion and I’m curious as to what happens next. It’s always the question for me; so what, now what? Was it just a nice chat for 90mins or is change going to be created? Watch this space.

The other point linked to the Academy games programme that has had some airtime recently is that of regulating the pre-academy age groups. There are current discussions that formally will allow U7’s to play matches against other academies although in reality this has happened for years!

It is pretty well known that pro clubs will play fixtures at U7 and U8 against other clubs. However, often they will cart the kids miles to go and play because they don’t want to be seen to ‘show off’ kids in their programmes that they will be trying to sign at U9 to other local clubs! London clubs dragging 6 and 7 year old kids to Birmingham and Manchester to play games, sold on the fact it was ‘a good experience’!

I asked the question in the chatbox of the impact of these regulations on the games programme but it was breezed over. I’m guessing it was in the “too hard / political to answer” box. But is this going to be discussed properly? Morally and ethically, is a formal games programme for 6 year old children appropriate? Does it fuel the ‘race to the bottom’ and more early specialisation? Maybe. It depends on what the programmes look like I guess.

A journalist called me to ask whether I had been involved in the consultation having led a 5-11 national coaching programme previously and worked for so long in the Foundation Phase and that was the first I had heard of it. The bigger concern to me was when he said that Pete Sturgess, arguably the country’s leading thinker within that age bracket, has not been consulted and knew nothing about it. That blows my mind frankly. Or would he have raised things they wouldn’t want to hear? Who knows.

Anyway, watch this space with this one as well I guess…

2 thoughts on “The dilemma of playing formats in Academy football…”