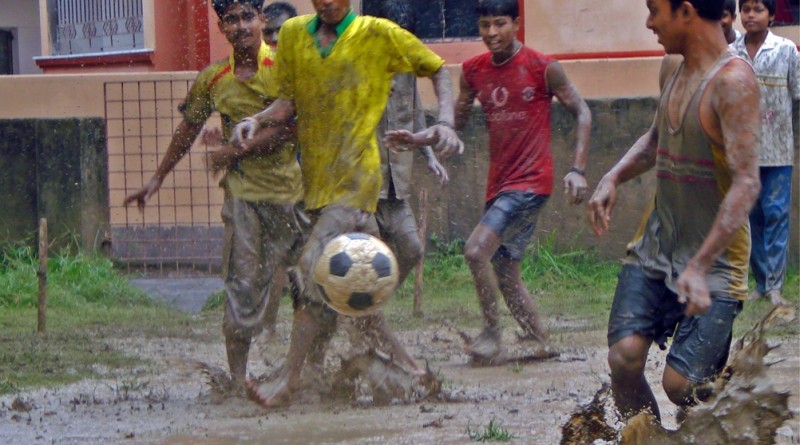 Unlike many connected people that will read this blog via social media I know Jack in real life! I’m incredibly fortunate to call him a close friend as well as a colleague. The beauty of having someone that you speak to every couple of days is that we have our own ‘peer learning community’ to discuss youth development, coaching and new podcasts as well as more random topics like Eddie Stobart and quantum cosmology! This is a great tale of what to do in order to meet the needs of the kids in front of you. Strap in and enjoy the story!

The Day of Himalayan Weather

Nick kindly asked me to break my blogging duck and write something that’s happened in my coaching that has made me smile. I will – but I’ll also stress that having the special opportunity work with so many committed and inspiring grassroots coaches makes me smile on a daily basis.

But first I’m going to break the rules and write about something that makes me sad. (Some) Adult attitudes in youth sport. That is when adults allow, and sometimes encourage, score lines to get out of control. To become demoralising. To lose a potential learning experience for all, sometimes down to ego. Sometimes down to the constraints of a league rule book or fixture list. Whatever. Nobody learns much from a 12-0.

The division the U12 team currently I coach is, sadly, no different. Due to a city saturated with so many different leagues, the difference in goal difference is a clear reminder of how uncompetitive some games can be at times. Ours is no different; 124 goals difference (+53 to -71) between top and bottom (12th)… after just 14 games. To put this into context, the Premier League, often cited as the most competitive league in Europe, after 14 games this season had a difference of goal difference differential of just 31 goals between top (Man City +16) and bottom (Aston Villa -15). I do realise that there is rarely much need to compare grassroots and professional football and that is where any comparisons will end.

The reason for the sombre start is because several weeks back we played bottom of the league. A team who haven’t picked up a point in two seasons and last year finished with over -100 goal difference from just 22 games. It’s a shame the trophies weren’t given out for bravery, resilience and perseverance as these boys, their coach and parents would’ve swept up.

So Danny (my co-coach) and I decided to do something a little different this particular game.  We decided to take on convention, to do what was right for the players and not necessarily what the rules said.

It started when we noticed during the warm up that the other team (let’s call them Resilience FC) didn’t have enough players. We had 11 (for a 9v9 game) so we suggested our ideas to, and got agreement from, the boys and gave the Resilience coach two of our players for the first half. The plan would be to swap them with two others for the second (they play in red and fortunately we had bibs… in the same shade of red!).

Start of the game

After a few minutes I noticed a boy in full red kit stood shivering on the side line next to the Resilience coach so I ran over.

‘What’s he doing stood there? Is he injured?’

‘Well don’t leave him stood here. He’ll freeze! Get him on.’

‘Are you sure? I didn’t want to assume.’

And so the first half carried on 9 v 11. It was closer than our 4-0 advantage suggested when the referee blew his whistle for half time but Danny and I knew that we would have to intervene otherwise the likelihood would potentially be double figures in our favour. And nobody would have learned much.

As half time arrived two more of our players turned up late (they had been representing their school at other sports). So we consulted Harry (captain for the day) who we later had to apologise to as the usual responsibility of picking the team and leading the team talk that comes with our armband had gone out of the window on this strange, and soon to get stranger, morning of grassroots football! Harry and the rest of the team agreed that it would benefit everyone if we tried to even the game up.

So we took the two red bibs off the boys who had stepped in for Resilience FC, took one more out of the bag, and gave them to our three more ‘effective’ players and sent them all on for the second half. Which was now starting 10 v 12!

The storm was coming!

Within five minutes it was 4-2. The sideline was still relatively calm. The storm was coming.

At this point we had to reassure one or two of the anxious parents what we had done and why.

The game now flowed from end to end in almost perfect balance. Creative play forced by the tight areas (given there were four more players on the pitch than the rules state there should be), last ditch tackles, great saves. The players didn’t notice the cold due to the excitement of the match. Unfortunately us adults on the side line had lost the feeling in our toes by now!

For Danny and I, that second half of 30 minutes was one of our favourite moments of working with these boys for the last three seasons.

What didn’t happen that made me smile was that at no point did our boys ask for the ‘effective’ players back. They didn’t moan about what we had done. They didn’t plead to put it back the way it should be. We suggested it and they signed up to it. All in as a collective. Even when the inevitable happened and Resilience FC equalised to make it 4-4. Yes it was tense. But they didn’t ask for the easy way out. They faced the challenge.

What did then happen that made me smile was a last minute penalty to us. Or rather a moment that fell out of it. Captain Harry, in charge of the decision, would have normally selected himself to take it but instead chose another teammate, Josh, to take the penalty. Josh scored. 5-4. Full time.

Celebration and devastation in equal measure. You’d have been forgiven for thinking that a league title had been won and lost in that moment. A grassroots replica of Liverpool v Arsenal’s title decider just down the road in 1989? Far from it given the respective league positions.

When Resilience FC’s coach shook our hands at the end of the game he couldn’t have been more thankful – “That’s the most exciting game we’ve ever been involved in”. And many of his team, although having lost the game, came off the pitch beaming that they had played a competitive game rather than the usual continuous loop of kick off, concede, kick off, repeat.

A major benefit of grassroots sport is learning through appropriate competition. Unfortunately ego’s and rule books can sometimes get in the way of this, which leads thousands of young people to fall out of love with the game and, sadly, drop out. A haemorrhage of unfulfilled potential.

Yes it was chaotic. Borderline ridiculous at times. But the adults came together and did what we thought was appropriate for the players. We did what we thought those boys would have done if they were a class at school, playing on the fields without any supervision: level things up. Make it exciting. It actually felt like a shame that our boys had won the game, especially in such a manner. But on reflection our words to them at half time were simply – ‘We’ve set you a problem, have a go at solving it.’ And they did.

Finally, back to Harry’s penalty. And the most pleasing moment. After the game we had to ask why he didn’t take it himself. Especially as Resilience FC’s ‘keeper was a close schoolmate.

“He’s seen me take loads of penalties at him. It was better for the team if Josh took it”…

I recognise that rules are put in place with the best of intentions and are there to be followed. The rules that govern youth football are, in my opinion, far more appropriate now than when I started coaching and indeed started working in football a decade ago. These boys were gobsmacked when they found out that my first game as a 9 year old was right wing in an 11-a-side game on the same pitch that our open age first team would play on later that afternoon! We have made massive strides and our formats and competition pathways, when followed, are more developmentally appropriate than they ever have been.

I’m a strong advocate, for example, of substitutes playing mini games against each other

I’m a strong advocate, for example, of substitutes playing mini games against each other and players playing in the appropriate format. I actually remember an U11 game I was involved with where the subs who were playing 4 v 4 off the side of the pitch with no adult supervision and had to be persuaded to come back on to the ‘real’ match!

In no way am I advocating that we rip up the books and turn the country into anarchy every weekend. What we did that day was quite unique in my experience. However, this particular week was right in the middle of the winter floods, we hadn’t played in nearly 3 months and the council had just managed to cut a rectangle out of the ankle deep grass we were stood in on the sideline! A sideline so cold that we weren’t prepared to have any of the players stood watching from.

The point I’m trying to make though is that, given the choice of an easy win and sitting on the bench or an uncertain close game that they play in, the kids will take the latter. They are motivated by the excitement of randomness and chance. As administrators and organisers of the game, sometimes us adults need to realise this, listen to those we serve and try to match like with like.

You can see as Jack’s story unfolded that everything was done by considering an important question – what would the children want and what did they need in this situation with the nature of the teams and the Himalayan weather? As adults we have a responsibility to put the needs of the players first, before our own ego or concern of three points and a league table standing.

The league table position is not a reflection of you or the type of coach you are but actions like this story make you the person you are seen to be. One that is nice to the kids.