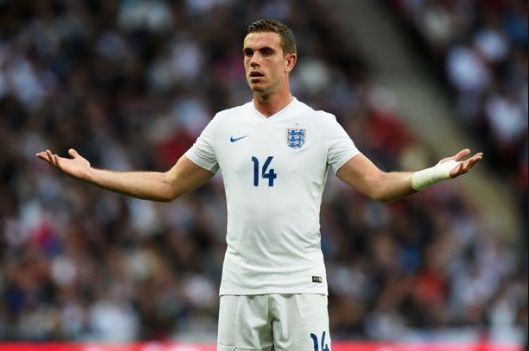 So it proved an interesting debate. I dropped a few tweets out during the Holland v England mentioning Jordan Henderson’s performance and such is the nature of football, lots of people had an opinion. I didn’t believe his first half performance was what I would expect personally of a world-class number 4, playing in that holding midfield role. I felt he played many passes sideways or backwards and didn’t influence the game when in-possession enough. Such was the way the Dutch played in the first half, he had a LOT of the ball, often unopposed without pressure but didn’t impact the game enough.

As someone pointed out, I am an ex-FA employee and the beauty of the two letters just before my previous employers name, I can now have an opinion about football publicly! I haven’t been allowed one for 14 years! So in the second half I did some very simple stats – highlight every pass Henderson made, from where he got the ball to destination, and track it’s movement. 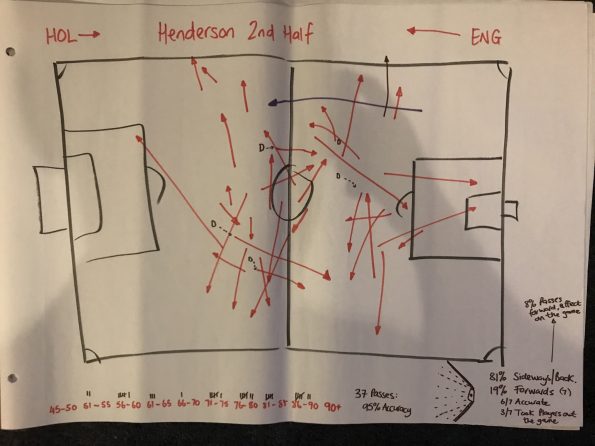 What can you see from the second half is Henderson touched the ball 37 times. Interestingly, there was a change of tactics from the Dutch in the second half and they played up against him so he was constantly opposed in-possession. This change I think impacted upon his first ten minutes and as you can see he touched the ball twice in that time. He was literally just working it out, solving the problem in the game he now faced. How could he get on the ball to affect the game now?

From his second half touches, 81% of these went backwards or sideways and only 6 were successful playing forwards. Only 3 of these actually took opposition players out the game so I raised the question about how effective he is, in-possession, with his forward passing. Thats the hard bare objective facts, like it or not.

The challenge of what I shared above is this doesn’t show the whole picture of Henderson’s contribution. This is then one of the issues about talent identification based upon data. It can be limited and be a narrow view. But still an important part of that jigsaw.

For example, retaining possession to create an attack in another area of the pitch would be suggested as being a good decision but the stats won’t show this. His work out-of-possession was good, managing the tempo and making some good decisions on when and where to press, covering for the movement of other players (such as when Stones and Maguire broke lines and drove into midfield areas) and won’t get identified when purely looking at stats. His role leading other players, organising, communicating, motivating, encouraging are not something that can be measured through stats. Yet some people think stats can tell you everything. They can’t.

Therefore part of my tweets were to raise the discussion and also to see how many saw the wider view.

Equally, what I use social media for is to help coaches link to their own context and make them think. So, if you are now looking at helping your Number Four in the same role, to aid their development, what does this mean for you as a coach?

Questions to think about:

So, in my opinion, could Henderson have done more to pass forwards and affect the game? Yes. Did he do plenty of other good things that affected the game positively? Absolutely. Can you measure all his impact with data? No. Talent is way more complex than that.

Coaches can consider their role critically by looking at top players and thinking about what this means to them. England Hockey have a great talent development philosophy which has “the end game in mind”. Some good words to consider and apply in your context.

3 thoughts on “Jordan Henderson debate…implications for talent and coaching”