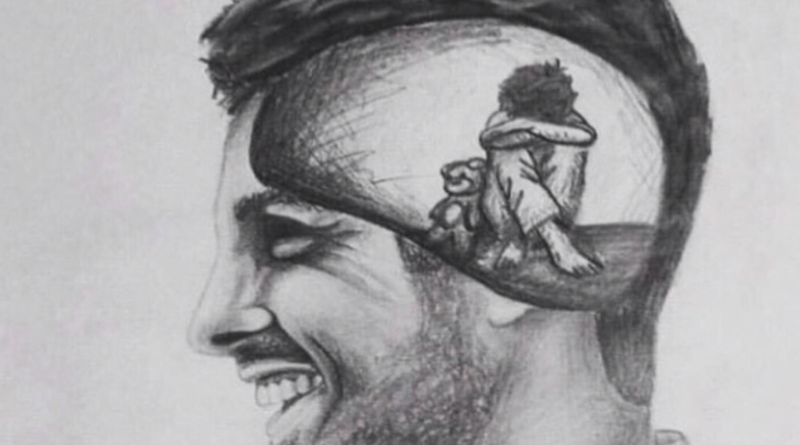 I can still picture exactly where I was. It was mid-October 2017 and I was out on my road bike, trying to get some miles in the legs. I was on the back-road from East Grinstead to Turners Hill in Sussex and it was right there, as I was approaching a long gradual incline that I had the conversation in my head about suicide.

The next few hundred metres of slow climbing was the darkest place I have ever been. I had made the decision I was done with this planet, I wasn’t offering anything, I had no purpose. But this had been building for a while now, to the extent that I knew which trains went through Three Bridges station at high speed without stopping. That would be the easiest, fastest way to finish things. I had decided who I would leave notes for and what they would say.

This had all developed over a period of time, like a small snowball rolling down a mountain, getting faster and faster and growing with every metre it rolled, until it was unstoppable. I can definitely empathise with how other people that get beyond the point of no return feel. I’ve been to the edge too.

The final straw was work but I’ll come to that shortly. Over the previous year I had been going through a pretty stressful divorce, one that rumbled on far beyond this point. That was taking its toll more than I realised. I had been a great sleeper throughout my life, never a problem and I could sleep anywhere, but now I was getting barely a few hours. I thought I was handling stuff but I wasn’t and probably played my fair share in making that divorce process worse than it needed to be.

In August, a couple of months before this bike ride, my godmother passed away. She had been a rock in my life and having had a very distant relationship with my own mum, that was the role she had always played. The person to turn to for advice or a pep talk, she didn’t pull her punches and was the only person that got away with calling me ‘Nicholas’! Bereavement is another difficult time and just became another block on top of the stress already building.

Then came work. I can remember the message pinging on my phone from my boss in the Talent ID team at 8.00am asking to see everyone that morning before a department meeting. I had a feeling he was going to say he was quitting his job and that’s exactly what happened. He had had enough and was leaving, putting himself first for his own reasons and fair play to him for doing that.

This meant the whole team was at risk and we knew exactly what was to follow. The Head of the wider department didn’t value what we did, mainly because you couldn’t ‘count and measure’ everything and there was grey areas of subjectivity but also didn’t connect with us as people. So the inevitable then happened. We all got called in to say a restructure was happening and we were told to reapply for the new jobs.

And this became the final straw that led me to the thoughts riding up towards Turners Hill. The way the one-to-one meetings were done was dehumanising, with no respect or recognition for what I had achieved or care for me as an individual. I had been there 14 years, changed player pathways across the country in youth football, influenced substitution laws with FIFA for the global game and driven forwards a more professional approach to Talent ID and education across the game.

But the way I was dealt with was the fact I was just a ‘body’. No empathy, no understanding, no compassion. Even my final redundancy meeting was conducted without decency or humanity. Values of an organisation really get tried and tested under stressful situations and they were not lived; they were just empty words on a glossy mug on everyone’s desks.

Following those October meetings things spiralled downhill. I wasn’t getting out of bed in the morning on work days, I stayed there, not wanting to move and not caring. I can recall one day being curled up in a ball in my office crying. It was a very low place and without formally diagnosing it I was really struggling. I had had a conversation with one of my closest friends in the team, also being made redundant, about his own personal situation and I encouraged him to speak to people and ask for help. I needed to look in the mirror too.

Then came that bike ride. Climbing hills for me is hard enough without the weight of divorce, bereavement and redundancy weighing me down.

But three things kept me alive that day and the first was my girlfriend. I had met someone and moved on and thankfully the person I met saved my life. She doesn’t like me saying it but it’s true. Without her I would not be here today. Maybe it’s luck but the fact she is a psychologist definitely helped; she could understand and having dealt with people in a professional capacity like me she knew how to manage it.

Thoughts had also turned to my son who was 3 years old then. What would he think growing up? How would he turn out? My dad has had a bigger impact on my life than anyone else; he’s my role model, my mentor and someone I aspire to make proud. So what would he feel too? Would he feel like he had done a bad job and failed, when in fact he had done the entire opposite?

I got back from that ride and for the first time properly explained to Rebecca, my girlfriend, about what was happening in my head.

The next day I called the private healthcare company through work and was diagnosed with depression. But that was the first step back out of this hole.

The catalyst for writing this article was having watched a BBC programme last night called A Royal Team Talk https://www.bbc.co.uk/programmes/m0005d27 and some reflections on points that were discussed in the show. You see everywhere now things in the press and media platforms about women’s rights, equal pay, bridging inequality gaps etc. and rightly so. But this is something that doesn’t get discussed from our side – pressures on men to behave, act or feel a certain way.

I’ve grown up and been influenced by family, friends and society that men have to “be” a certain person. Showing emotion is a no-no. Talking about feelings is a no-no. Admitting weakness is a no-no. I had played in football teams for decades, this was never an option there! The things I was going through, aligned with the perception of how I had to be seen as a man meant I never spoke to anyone. My closest friends didn’t know, my family didn’t know. And never speaking was what drove me to the edge of that very dangerous place to be mentally.

I did a course of counselling which in part helped. But then chatting to others helped as well. My relationship with Rebecca grew stronger and tighter. The guy in my team that was having his own mental ill health challenges became an ally and we talked all the time, and still do. Slowly things improved but I think for 6-8 months after diagnosis this was a daily challenge for me. It had been a part of me for awhile before without knowing too.

I don’t know if it will ever totally disappear but I’m in a far better place now. I can talk openly about it, how difficult it was and even though I know I will get emotional talking about, I’m ok with that. I still have days where I struggle a little with life.

And that is why the picture that is on the front page of this blog post is so pertinent to me.

On the outside, people would not have known. They would have seen a smiling, confident person that went about life in an upbeat manner. Facebook, Twitter and Instagram would have told an entirely false story, mainly due to the feelings of being a man I felt I had to portray externally.

But inside I was that little person.

This blog (for anyone that has shown the resilience and perseverance to actually get this far!) is just to say it’s ok to be a man and show weakness, to ask for help and honestly confide in others. You are a human being. We all have challenges through life that can make some days a struggle. But please don’t do it alone. And if anyone does need support, just ask.

24 thoughts on “The stuff men can’t talk about.”